What is the value of a portrait when we don’t know who is in it?

Knowing the Unknown Sitter was an on-line anthology of texts relating to ten unidentified portraits, selected from a wealth of material found in national collections across the UK. Through the discussion of these portraits, unknownsitter.com raised questions about the nature of identity, representation, and the role of the observer in interpreting visual images. The result of an initial collaboration between myself and art historian Lara Perry, the project brought together writers from a range of disciplines as well as portraits – some of which have never been published before – to explore the problem of the unknown sitter, and the value of their portraits, once identity has been lost.

“With no record of its origins, establishing the youth’s identity or that of the wearer seems impossible. Yet here lies a clue: the reading of this face is inextricably linked to some consideration of its wearer. So while actual identities may never be known, the notion of the wearer offers other possibilities for understanding the portrait.”

“We can ‘read’ messages even from the faces of strangers.” Read the PDF

A little girl in a Kodak Snapshot Album

“What sort of life might he have had when he did go to sea? If I were ‘in the field’ doing my research, I would be talking with people about their interpretations of their own lives, observing cultural practices and taking part in various activities. From all this I look for the commonalities which might be discerned in the individual life. However, there is no one today who has any direct experience of the life of a mid 19th century naval cadet.” Read the PDF

Portrait of a Naval Cadet

“Stripped of the usual frameworks of understanding, such as details of the artist and the sitter and the owner or collection,the painting nonetheless accrues meaning and value as I survey its formal qualities and speculate about its significance. How is the painting composed? What is its focal point? And, perhaps most intriguingly, who is this man?” Read the PDF

“While we can never recover the responses of the original viewers of this photograph, we can imagine that her general bearing and body shape, though appropriate for a model of demure ladyhood, would also make her instantly recognizable to those who knew her well. The slope of her shoulder or the shape of her ear peeping from carefully-curled hair might evoke feelings of affectionate familiarity or respectful admiration.” Read the PDF

“As an image of an unidentified Victorian woman, this portrait cannot look just as it did when it was supposedly of Charlotte Brontë, and it certainly doesn’t mean the same. Indeed, what does it mean, post-Brontë? What can it mean – without the punctum of Brontë’s identity? Likeness and identity are, after all, the lynchpins of portraiture and the National Portrait Gallery’s essential currency.” Read the PDF

“What we might make of the portrait as traveller? Portraits are normally thought of as static objects, fixed in oil on canvas and often fixed in a place of display, like a pronouncement handed down from the past. But the portrait which began its life in motion, and which is small enough to be handed around like a photograph (or portrait miniature) belongs to a different scenario: it is an object of exchange or negotiation, rather than one of authority.” Read the PDF 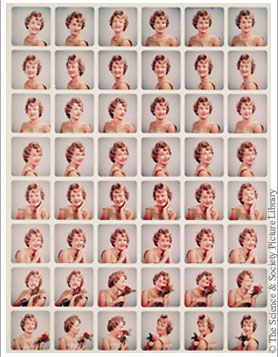 “If character revelation is traditionally the essence of good portraiture, we might assume that in a set of forty-eight images there is a greater chance of capturing the essence of the sitter than in a single one. Ironically, however, it seems that the set of multiple images shows the mutability of the photograph as a form more clearly than a single image can.”

“One might speculate also about the extent to which Hill and Adamson were interested in their subjects as ‘types’; as socio-economic representatives of a particular, pre-industrial life, rather than as individuals. In other words, to what degree is this image a portrait of an individual or a specimen of social life? Here again, staring long and hard at our photograph is unlikely to bring us any nearer an answer.” Read the PDF

“Maybe this photograph was rejected by P106[19] because of the blurry ‘leg ‘o’ mutton’ puffed sleeve? That could easily explain her anonymity. That’s it, I thought, the photo stayed as an unlisted reject in the studio for years until she was forgotten.” Read the PDF

unknownsitter.com was made possible by the British Academy’s Small Research Grant Scheme